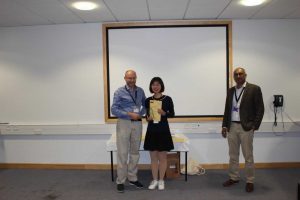 Reacting to the prize, which is named after the turn of the century pioneering Irish/British fluid mechanician, Xizhuo wrote, “I feel happy and satisfied that my efforts in the past years have been rewarded.

I would like to first thank my two superb supervisors, Professors Kai Luo and Yiannis Ventikos. I appreciate my scholarship, the Dean’s prize, from the Faculty of Engineering for financial support during my PhD study.

I’m also grateful for my examiners and their comments in my transfer viva and final thesis defence. They are Professor Stavroula Balabani, Dr Andrea Ducci, Dr Jie Huang (from UCL MechEng) and Professor Wen Wang from QMUL.

Finally, I would like to thank all the staff in the Department office for their professional service. The support from my group mates is also appreciated.”

Dr Jiang, whose thesis was titled ‘Ion transport through the endothelial glycocalyx layer under flow conditions: a large-scale molecular dynamics study’, is the third winner of the Osborne Reynolds prize from UCL Engineering in recent years.

Dr Joanna Brunker won during her stint at UCL Medical Physics in 2014. Fellow MechEng researcher Dr Joseph Sherwood (now a RAEng fellow at Imperial) won the accolade for his thesis presentation ‘A new approach for investigating microhaemodynamics’ the previous year.