Honoured for outstanding contribution to the advancement of the mixing science

Professor Michael Yianneskis, Honorary Professor at UCL Mechanical Engineering has been named by the European Federation of Chemical Engineering (EFCE) as the recipient of the 2018 Lifetime Recognition Award in Mixing for his outstanding contribution to the advancement of the mixing science.

Yianneskis, who is also an Emeritus Professor of Fluid Mechanics (King’s College London), said, “I am thrilled to be receiving the EFCE Lifetime Recognition Award in Mixing. I have thoroughly enjoyed my research in fluid mixing, so this recognition by the Federation is most rewarding. All of my research has involved a team effort; it has been a pleasure and a privilege to have worked with outstanding colleagues and doctoral students, and this award reflects their contributions as much as mine.”

The esteemed professor’s contribution to fluid mixing research started some 30 years ago, while Yianneskis worked at Imperial College London, developing and consolidating his expertise in laser-based techniques in fluid mechanics research.

His seminal work on the steady and unsteady flow characteristics of stirred reactors is one of the most highly cited papers in fluid mixing (Yianneskis et al. 1987, 281 citations).  The paper was named amongst the 21 most influential contributions to mixing research (21st Anniversary Celebration of the North American Mixing Forum, AIChE meeting October 2011), alongside works by eminent turbulence researchers such as Kolmogoroff and Hinze.

Yianneskis has published over 200 refereed papers in the field of fluid mechanics and applications such as combustion, biomedical engineering, heat transfer and mixing. His work has been cited over 5161 times to date.

Michael will be presented with his award on 11th September, 2018 during the 16th European Conference on Mixing, which will be held in Toulouse, France.  Dr Ducci will be one of the key note speakers presenting on the topic of “Flow and mixing dynamics across different bioreactor platforms” 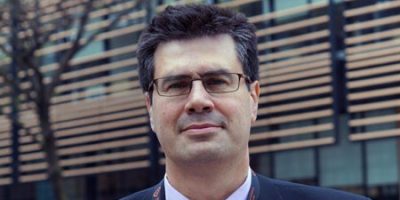