Two UCL Mechanical Engineering students have received awards in memory of Diana, Princess Wales for their inspiring work in the community.

Undergraduate Mohamed Afify was acknowledged for founding and leading Project Impactive, a team of volunteer UCL students who together design and build bespoke engineering devices to help disabled people overcome specific challenges, after consulting with the individual recipients personally. 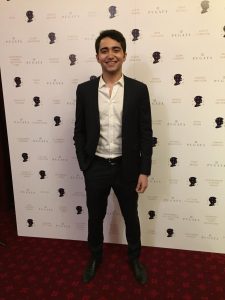 Mohamed Afify at the House of Lords ceremony

Fellow awardee George Imafidon, also a UCL Engineering undergraduate, was lauded for having co-founded the popular Motivez app to help young people from a range of communities identify and access career and personal development opportunities. Inspired to create the app after his brother’s wrongful arrest in 2011, some 2,000 users aged 16-25 now use the online platform every month to explore and access workshops, seminars, conferences and other events for skill building, networking, and more.

George Imafidon said, “It’s an honour to receive the Diana Award and live out Diana’s legacy for young people to positively change the world. It reminds me that as an engineer and technologist, we should never forget why we build things. It’s always about serving people and leaving places better than we found it.”

Neither student is a stranger to receiving awards. Afify, who graduates this summer, was named African and African Caribbean Student of the Year by Future Leaders magazine in 2018 and has collected successive awards for Project of the Year in Students’ Union UCL’s Volunteering Awards on behalf of Project Impactive.

Imafidon has won a string of honours, including an Engineering Leadership Scholarship from the Royal Academy of Engineering and being named among the UK’s Top 10 Black Students. 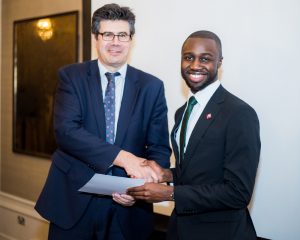 Congratulating both students, UCL Mechanical Engineering Head of Department Professor Yiannis Ventikos said, “These Diana Awards constitute much deserved recognition for their absolutely brilliant initiatives and for putting in the effort to make these inspirational ideas a reality.

We try to instil a “change the world” attitude to our students and these wonderful young engineers are doing exactly that; they identified those that are most in need and brought their ingenuity and technical skills forward to help them, where it counts.”

The duo received their Diana Awards in a ceremony in the House of Lords Monday where 85 inspirational children and young people were honoured for their social action or humanitarian efforts.

The Diana Award, which celebrated its 20th anniversary year, is given out by the charity of the same name and has the support of both of the late Princess’ sons, The Duke of Cambridge and The Duke of Sussex.

On Video Mohamed Afify talks about Project Impactive at MechEng Night: For the Love of Engineering