Bioreactors are widely used to produce different therapeutics in the biopharmaceutical and regenerative medicine industries. Drug development relies on small multi-well plates shaken around an orbital diameter, while production-scale bioreactors are agitated by stirring. These different methods yield different fluid dynamics, making it difficult to scale lab findings to industry.

A team of researchers from UCL is starting to bridge this gap by applying analytical techniques for stirred bioreactors to the fluid dynamics of orbitally shaken bioreactors (OSBs). Combining vertical and horizontal measurements through particle image velocimetry, the group reconstructed a 3-D model of OSB flow and determined key features of the coherent structures inside OSBs. They publish their work this week in Physics of Fluids, from AIP Publishing.

“In this work, we used two different decomposition techniques, which allowed us to identify dominant modes of oscillation of the flow inside in the reactor,” said Andrea Ducci, an author on the paper. “The first pair of modes controls the free surface motion and therefore the aeration of cells, while the second pair is related to the bulk flow of the tank.” Shaken bioreactors offer low shear stresses and well-defined free surfaces of oxygen transfer, a gentle swirling that is vital for culturing mammalian cells. Proper orthogonal decomposition (POD), ranks modes by energy, while dynamic mode decomposition (DMD), orders them by frequency. Ducci said that their team is using these techniques to analyze OSBs for the first time.

The researchers used Finite-Time Lyapunov Exponent (FTLE) analysis to assess how well the reactor disperses nutrients. In FTLE, the paths of adjacent particles are stitched together from a series of time-delayed images. The further the particles are after a period of time, the better the mixing.

The team measured the flow in the OSBs at two different Froude numbers (Fr), dimensionless quantities that relate flow inertia to gravity and are used to predict when the bioreactor flow is in or out of phase with its orbit.

“If you keep scaling parameters, such as the Froude number, constant, you can increase the size of your system and re-create the optimal environment,” Ducci said. “If you’re a biologist and have identified the optimal conditions for cell growth, but need to produce in a larger amount, we can use these scaling parameters to make the reactor larger.”

Next up, the team plans to extend their research to other types of noncylindrical reactors and improving cell suspensions, to further bridge the gap between different types of bioreactors. 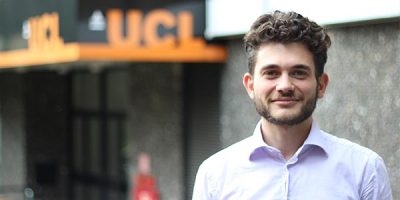