Researchers at UCL have solved a major piece of the puzzle that makes up the ancient Greek astronomical calculator known as the Antikythera Mechanism. 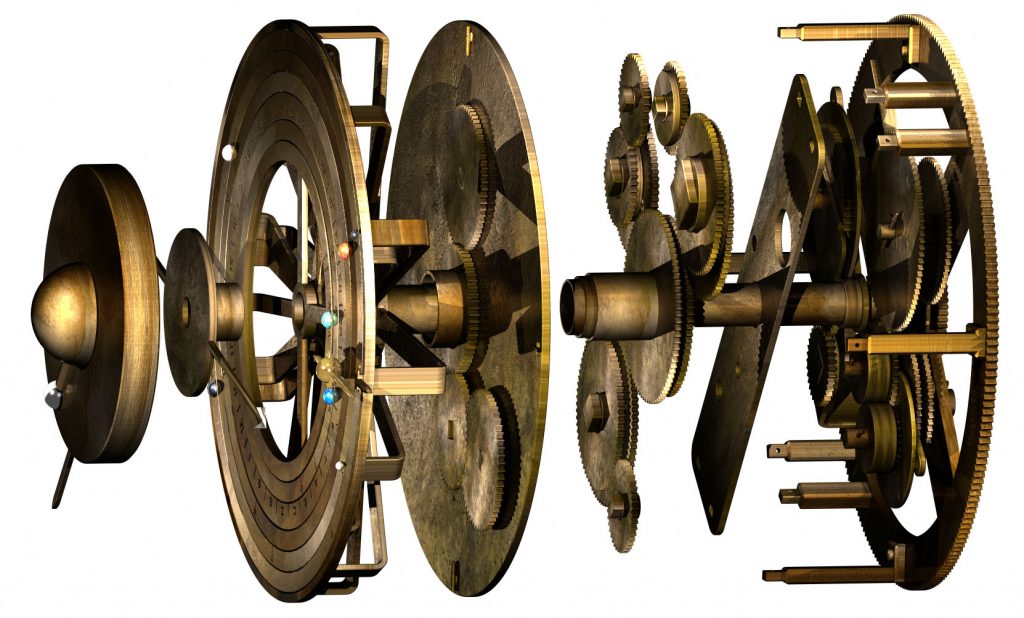 Computer model representing the Cosmos Gears of the mechanism

Researchers at UCL have solved a major piece of the puzzle that makes up the ancient Greek astronomical calculator known as the Antikythera Mechanism, a hand-powered mechanical device that was used to predict astronomical events.

Known to many as the world’s first analogue computer, the Antikythera Mechanism is the most complex piece of engineering to have survived from the ancient world. The 2,000-year-old device was used to predict the positions of the Sun, Moon and the planets as well as lunar and solar eclipses.

Published in Scientific Reports, the paper from the multidisciplinary UCL Antikythera Research Team reveals a new display of the ancient Greek order of the Universe (Cosmos), within a complex gearing system at the front of the Mechanism.

Lead author Professor Tony Freeth (UCL Mechanical Engineering) explained: “Ours is the first model that conforms to all the physical evidence and matches the descriptions in the scientific inscriptions engraved on the Mechanism itself.

“The Sun, Moon and planets are displayed in an impressive tour de force of ancient Greek brilliance.” 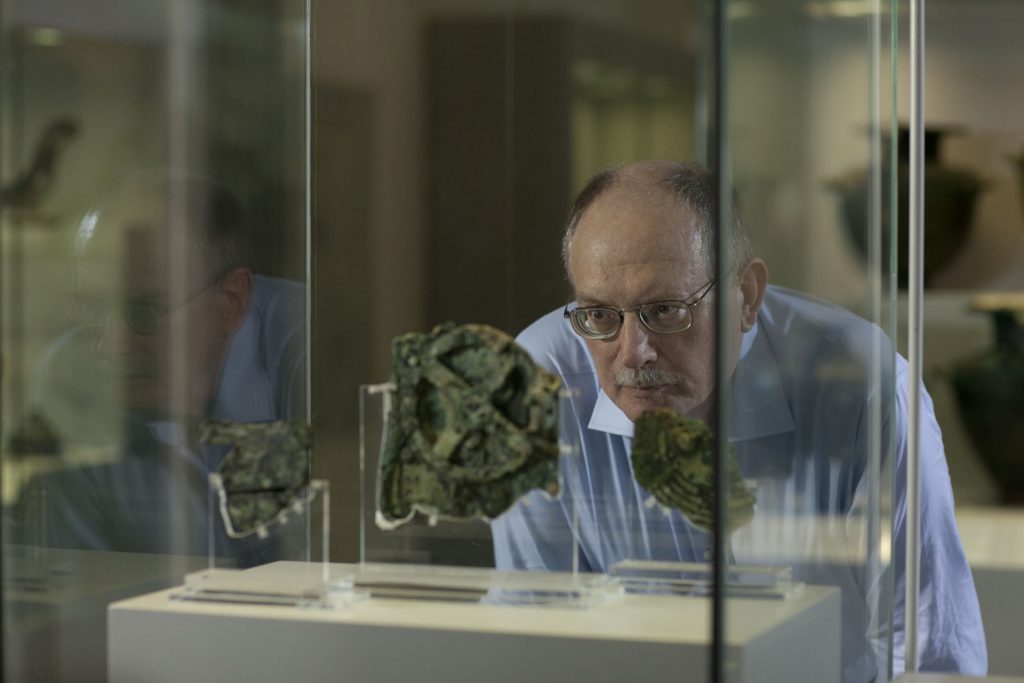 The Antikythera Mechanism has generated both fascination and intense controversy since its discovery in a Roman-era shipwreck in 1901 by Greek sponge divers near the small Mediterranean island of Antikythera.

The astronomical calculator is a bronze device that consists of a complex combination of 30 surviving bronze gears used to predict astronomical events, including eclipses, phases of the moon, positions of the planets and even dates of the Olympics.

Whilst great progress has been made over the last century to understand how it worked, studies in 2005 using 3D X-rays and surface imaging enabled researchers to show how the Mechanism predicted eclipses and calculated the variable motion of the Moon.

However, until now, a full understanding of the gearing system at the front of the device has eluded the best efforts of researchers. Only about a third of the Mechanism has survived, and is split into 82 fragments – creating a daunting challenge for the UCL team. 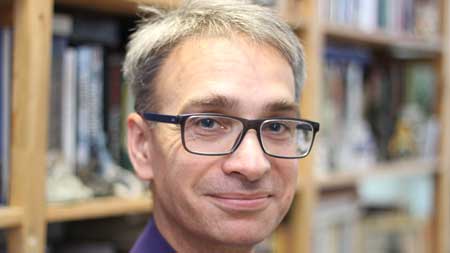 Previous research had used X-ray data from 2005 to reveal thousands of text characters hidden inside the fragments, unread for nearly 2,000 years. Inscriptions on the back cover include a description of the cosmos display, with the planets moving on rings and indicated by marker beads. It was this display that the team worked to reconstruct.

Two critical numbers in the X-rays of the front cover, of 462 years and 442 years, accurately represent cycles of Venus and Saturn respectively. When observed from Earth, the planets’ cycles sometimes reverse their motions against the stars. Experts must track these variable cycles over long time-periods in order to predict their positions.

“The classic astronomy of the first millennium BC originated in Babylon, but nothing in this astronomy suggested how the ancient Greeks found the highly accurate 462-year cycle for Venus and 442-year cycle for Saturn,” explained PhD candidate and UCL Antikythera Research Team member Aris Dacanalis.

Using an ancient Greek mathematical method described by the philosopher Parmenides, the UCL team not only explained how the cycles for Venus and Saturn were derived but also managed to recover the cycles of all the other planets, where the evidence was missing.

PhD candidate and team member David Higgon explained: “After considerable struggle, we managed to match the evidence in Fragments A and D to a mechanism for Venus, which exactly models its 462-year planetary period relation, with the 63-tooth gear playing a crucial role.” 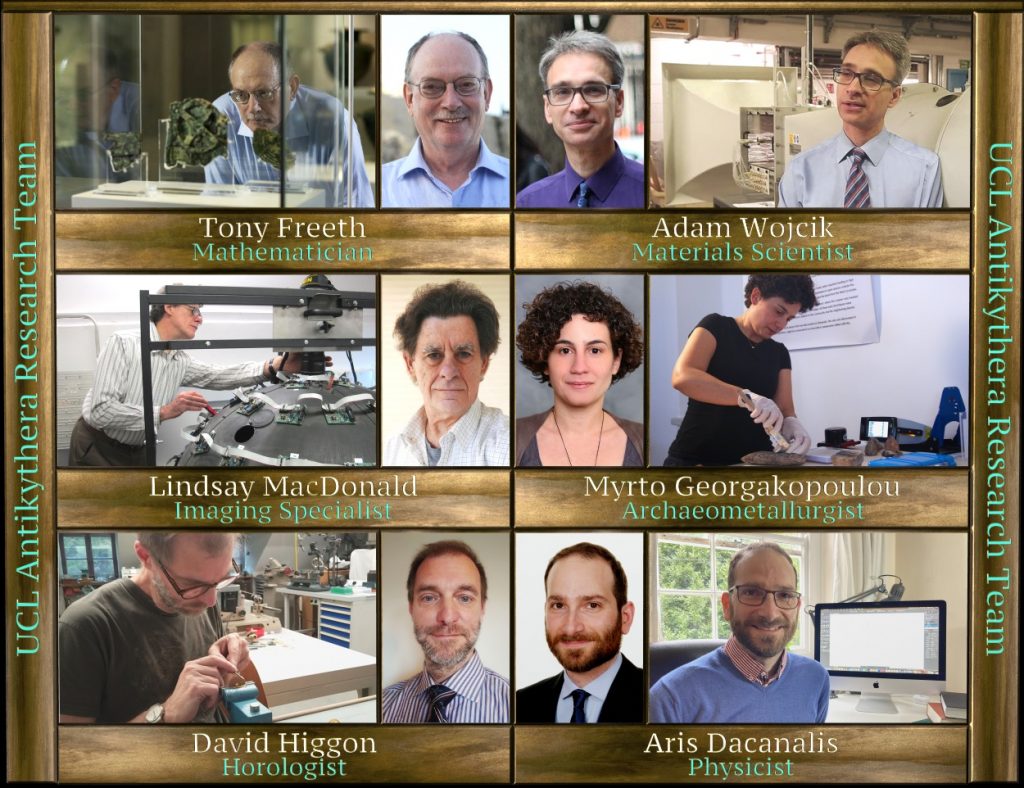 Professor Freeth added: “The team then created innovative mechanisms for all of the planets that would calculate the new advanced astronomical cycles and minimize the number of gears in the whole system, so that they would fit into the tight spaces available.”

“This is a key theoretical advance on how the Cosmos was constructed in the Mechanism,” added co-author, Dr Adam Wojcik (UCL Mechanical Engineering). “Now we must prove its feasibility by making it with ancient techniques. A particular challenge will be the system of nested tubes that carried the astronomical outputs.”

The discovery brings the research team a step closer to understanding the full capabilities of the Antikythera Mechanism and how accurately it was able to predict astronomical events. The device is kept at the National Archaeological Museum in Athens.

The UCL Antikythera Research Team is supported by the A.G. Leventis Foundation, Charles Frodsham & Co. and the Worshipful Company of Clockmakers. 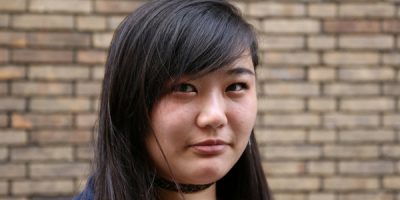