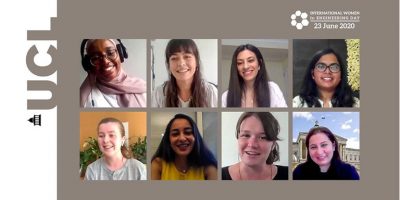 Every International Women in Engineering Day (June 23) UCL Engineering takes the opportunity to showcase and champion our fantastic female students, researchers and academics. This…

When irradiated with a high-intensity ultrasonic field, living tissue might undergo phenomena ranging from heat deposition to bubble formation. Such effects have the potential of inducing structural and functional changes in soft tissue, and have been traditionally avoided in diagnostic ultrasound.

In recent years, however, efforts have been shifted towards enhancing and controlling the occurrence of these phenomena so they can be used in other biomedical applications such as non-invasive surgery with high-intensity focused ultrasound (HIFU).

Our research focuses on understanding ultrasound-induced bubble formation and activity in order to model and design appropriate protocols for specific surgical needs.

Matheus graduated in Mechanical Engineering in 2015 from Rio de Janeiro State University (UERJ) in Brazil and undertook a year abroad at the University of Sheffield, where he has worked as a Research Assistant at the Laboratory of Acoustics. Since the second year of his studies Matheus was involved in projects at the Laboratory of Thermodynamics and Optimisation in UERJ.

For his undergraduate research, he was awarded a Scientific Initiation scholarship by the Carlos Chagas Research Foundation in Brazil in 2012 and has also worked for industry-sponsored projects in the Department of Mechanical Engineering at Sheffield University. His PhD at UCL is funded by the Brazilian National Council of Technological and Scientific Development, through the Science without Borders scheme.