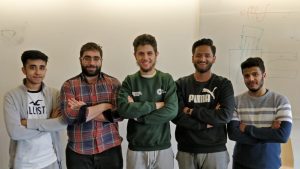 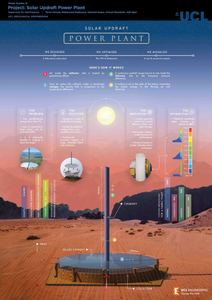 A Solar Updraft Power Plant (SUPP) is a renewable energy generation system which utilises solar energy to generate electricity. It consists of a collector, a power conversion unit (PCU) and a solar chimney (SC). The underlying working principle relies on the air beneath the greenhouse-like glass collector heating up from the thermal energy provided by the sun. Due to the buoyancy effect, hot air under the collector flows towards the centre and up the solar chimney through the PCU turbines, generating electricity.

This project explores the potential to improve the performance and associated cost efficiency of SUPP technology. A laboratory scale prototype was designed, built, and tested. Computational fluid dynamics (CFD) and mathematical modelling were validated from experimental results. The potential for scaling up of the technology for commercial use was investigated from financial and power output predictions.

The developed prototype has a solar collector to trap heat like a greenhouse and a chimney for the heated air to rise through. Heating panels were used to simulate the heat provided by the sun. Realistic temperature increase under the collector and air velocity through the chimney were achieved. Improvements to the design based on simulation results (optimisation methods) showed an increased air velocity and hence power output of the system.